Skip to content
Search the OSCAR Documentation
< All Topics
Print

This is a part of a series on installing OSCAR. Start by reading the first part

You have 99% of a production ready OSCAR instance at this point.  There are some minimal additional configuration settings that you really should do at this point to secure any exported data and to protect the server itself.

Two factor authentication increases the security of the login process.

Data exports depend on PGP to encrypt the zipped patient files.

Principles of layered security require that a firewall be configured on the server even if your box is behind a solid open source router such as pfSense.

OSCAR can be configured to support  increased security.  Two-factor authorization is achieved with the user name and password (what the end user knows) and a one-time pin generated by an authenticator housed in the users smartphone (something they have).  Starting in OSCAR 19.1 a 2FA.sql script will be set to run for new installs, and be made available for running for upgrades.

For a given user to be able to use 2FA the oscar_15.security table will need to have totp_enabled set to 1 and a mime32 encoded secret set.  The following is the setup for an user named oscardoc
Remember to use this secret, the time period (default 30s) and encryption (default sha1) to set up the Authenticator app on the smart phone (you can use FreeOTP app).
The server side is handled by OATHTOOL
Ensure that crontab has an appropriate entry for the 2FA.sh script that calls oathtool

Generate a key for use in OSCAR for the tomcat8 user.  Follow the prompts (the defaults will do fine), and set a pass phrase.  Be sure to set a name and email to serve as the UID for the key, and as a handle on any files you need to sign.  The following is similar to expected output.

To configure OSCAR to use pgpgpg you need to change the oscar.properties file key value to the UID you selected, in the above case you would use

Update the location of the keyring and configuration for the tomcat8 user, for the method cited that would be the following.

There are many options for encryption and you must balance ease of use and security.  Symmetric encryption will assign a password to both encrypt/decrypt the generated file.  You can configure that with the following setting (replace the ******* below with a password string)

To test your configuration you must

There are many programs that support PGP standards in many operating systems.  You can decrypt as your previously configured tomcat8 user on the OSCAR server itself with something similar to

You will need to supply the password that you set earlier in oscar.properties .

Migrations from OSCAR 15 use the same syntax for upgrade as for installation and both the program and the database will be updated.  You can do this safely as you will not break your installation.  However as upgrading will occasionally break functionality with a new bug, be prepared to revert by downgrading.  Ensure you have backup in hand (!) and then you can revert to an earlier OSCAR 19 thusly

If you are upgrading from OSCAR 15 remember to run the data migration tools in Administration to finish your setup.  Everyone has to run the migrations to Roster Data.

Only those with pre-existing HRM data need to run the HRM utility.  ONAR migration is a tool for migration from OSCAR 12, you do not need to run.  The DEB will migrate you to the new Contacts interface (the old one is deprecated), do not run the migration utility after a DEB install or you will have duplicate entries!  You will need to upgrade the Roster data.  Do not rush, for even a medium sized clinic these migrations can take over an hour.

This utility will migrate OSCAR 15 rostered physician data to the newer OSCAR 19 format (OntarioMD 5.0 CMS standard). This utility will set the Enrolled To Physician to that of MRP for patients where Roster Status was set to ROSTERED.
This is only run once on conversion of an OSCAR 15 system to an OSCAR 19
Allow a coffee break for this to run.  When finished “Upgrade Complete” will display

This utility will migrate OSCAR 15 HRM data to the newer OSCAR 19 format. This is only run once on conversion of an OSCAR 15 system to an OSCAR 19. Allow at least an hour for this
when done the “Changes were successful” message will display

In prior versions middle names were often inserted into the first name spot in the master demographic record.  You can migrate them to the middle names section with the following.

Now extract the second (and further) name for middleNames

Now trim the first_name to just the first

OSCAR 19 is a rolling release so that stability can fluctuate.  If the newer version you install appears unstable you can downgrade the installation by running the older deb to overwrite the new.  With OSCAR you used to have to delete the existing oscar.war first to be sure that newer java classes can be replaced with the older ones.  This is no longer strictly necessary but remains good form.

then run the older deb over the new one.  Note that if you have used a data migration tool in OSCAR 19 you can only go back to OSCAR 18 or newer, there is no going back to OSCAR 15 at that point.  If you are using Java 8 and Tomcat 8.5 you can use a DEB no older than oscar_emr15-88~844.deb.

Although OSCAR isn’t for everyone, consider asking for help on the sourceforge list for BC-users (its misnamed) or sending us a note why you are uninstalling it.  OSCAR can be removed using dpkg

This will remove the program, but keep the data and configurations.
For complete removal of all sensitive patient data, or just to clear your server for further testing, you need to use purge.  Be very careful that you are on the right server and have backups on hand before you run this as it cannot be undone. 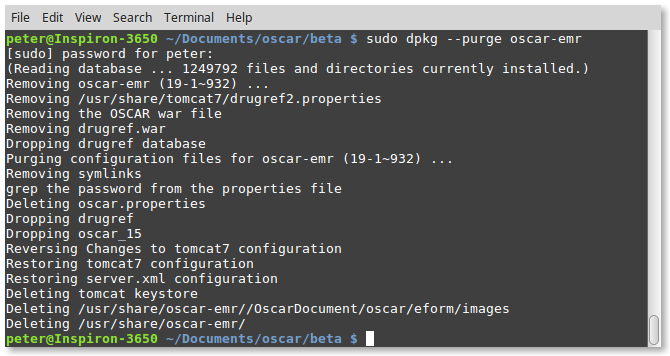